4 Key Strategies To Improve Employee Engagement In Your Organisation

4 Key Strategies To Improve Employee Engagement In Your Organisation

We explore the 4 fundamental pillars of engagement – What I Know, What I Feel, What I Believe and What I Experience – and reveal 4 strategies to help you improve employee engagement in your organisation.

Have you ever heard the story of JFK and the janitor?

When visiting the NASA headquarters for the first time in 1961, President John F Kennedy happened across a lowly janitor sweeping the floor.

Keen to meet and great as many people as possible, he went up to the janitor and asked him what his job role was.

And what do you think the janitor said?

He didn’t remark ‘I just keep the floors clean, sir’. Nor did he say, ‘it’s my job to help keep the place looking spick and span’.

Instead, he replied with…

We’re guessing you’ve already clocked onto the significance of this short but sweet piece of storytelling.

But what made the janitor utter this surprisingly poignant response?

After all, he wasn’t directly involved in constructing the space shuttle that would eventually propel Neil Armstrong to take his first step on the lunar surface. In reality, he was virtually at the bottom of the pecking order within NASA’s employee hierarchy.

But the brilliant thing is that to the janitor, that didn’t matter.

He was able to see himself as part of a higher purpose. Contributing to something much bigger than himself, and playing his own role – however small – in shaping the course of history.

To him, his job wasn’t just a job. It was one small step along the way to a collective giant leap.

And isn’t that a meaningful connection we’d all love to be able to create for ourselves?

Why is employee engagement so important when it comes to supercharging business results?

It’s no secret that employee engagement on the scale that kept the lowly janitor inspired and committed to the cause is something which business leaders everywhere dream about.

Imagine leading or working in an organisation where everyone was always thoroughly engaged, connected and dedicated, with the inspiration, enthusiasm and energy to put their best foot forward on every project, every day. 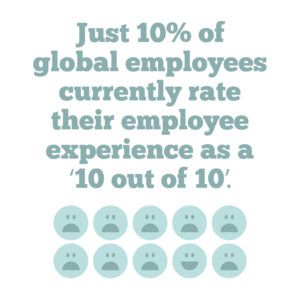 What could possibly be better than a workforce of people who can see past the pay check – and genuinely care about the impact they can have on the organisation?

Surely, this should be fairly easy to make happen, right?

Unfortunately, the reality says otherwise. While employee engagement strategies have unsurprisingly topped the priority list for most business leaders for the last few years, the bad news is only a select few have actually managed to successfully bring the story of the NASA janitor to life within their own organisations.

And globally, employees are in agreement. Just 10% currently rate their employee experience as a ‘10 out of 10’ – a significant gap that’s ripe for the filling.

It’s no surprise then, that we’ve got a pretty big engagement problem on our hands.

But with employee engagement being so important to business results, and with a war for talent currently waging all around us, senior leaders can’t afford to not create new, watertight strategies to turn it around.

4 success strategies to improve employee engagement in your organisation

It might sound far-fetched, but it really isn’t: when you focus resolutely on creating truly effective employee engagement strategies, you’ll see improvements in practically every organisational metric there is. 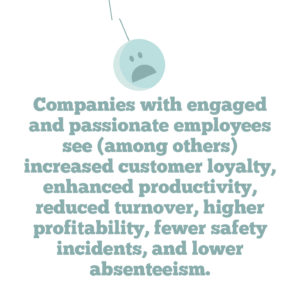 The good news is, while there are a lot of bases to cover to really hit the nail on the head when it comes to employee engagement, all it takes is a bit of dedicated focus to successfully combine all the elements and get the recipe absolutely right.

At H&H, we care about helping organisations everywhere to realise the exceedingly powerful benefits of employee engagement for themselves, so everyone can win.

Each of these pillars is essential to driving engagement success. And what’s more, they’re inextricably linked. If even just one is missing or lacking, you won’t be able to achieve the outcomes that are possible through a dedicated and persistent focus on making sure all the foundations are 100 per cent watertight.

Each of these pillars is essential to driving engagement success. And what’s more, they’re inextricably linked. If even just one is missing or lacking, you won’t be able to achieve the outcomes that are possible through a dedicated and persistent focus on making sure all the foundations are 100 per cent watertight.

Find out exactly what an engaged employee really looks like, and how to make it happen in your organisation, in our popular IC Field Guide!

In this blog, we’ll break each pillar down into its component parts – to help you create employee engagement strategies that will completely revolutionise your bottom line.

This pillar is all about employees feeling valued as a key players within the business. 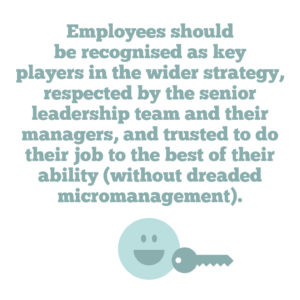 Have you ever had the experience of feeling undervalued in your organisation? We’re sure you’ll agree that it’s far from pleasant. It can damage your motivation, make you feel isolated and unappreciated, and – at the very worst – prevent you from wanting to come to work at all.

Consistent appreciation and recognition, then, are at the very heart of this employee engagement strategy. Employees need to feel recognised and respected by the senior leadership team and their managers, and trusted to do their job to the best of their ability (without the dreaded micromanagement).

Naturally, employees who are working their fingers to the bone for your company will expect a little more than the occasional half-hearted ‘thank you’.

It goes without saying, but a whopping 96% of employees think that receiving feedback regularly is beneficial to them – impetus enough to dish out the good words and constructive criticism on a more frequent basis?

You can be inventive with how you give out feedback too. Why not write a personalised card, or offer a team-wide free lunch? This will make it more impactful and memorable, providing a motivational boost.

However, if the feedback is insincere, employees will sniff it out in no time – so always ensure you say what you mean, and mean what you say. Authenticity is key to effective employee engagement.

Join global internal comms professionals, managers and leaders on 29 May for the FIRST EVER global online IC conference!

Sign up for this FREE online conference to get inspiration, advice and best practice from leading experts across the industry, and connect with like-minded professionals around the world.

After all, when was the last time you persisted with something you perceived to be pointless?

It’s about making the WHY clear. Why are we doing what we’re doing? What’s the ultimate goal or benefit?

Having a clear sense of the overarching purpose is not only incredibly motivational, but it also makes our work more fulfilling and rewarding.

Key to making a valuable contribution is not just becoming part of the furniture. Step forward the employee voice – a pivotal factor in making an employee feel valued and appreciated. 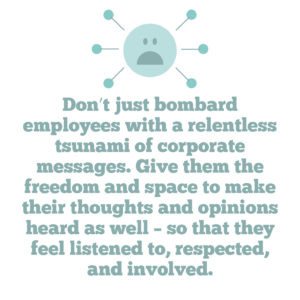 When it comes to internal communications, bottom-up conversations are just as important as top-down ones. It makes sense that 75% of employees would stay longer at an organisation where they were listened to and had their concerns addressed. Senior leaders need to keep their ears to the ground, and act consciously upon employee anxieties or suggestions.

So don’t just bombard your employees with a relentless tsunami of corporate messages. Give them the freedom and space to make their thoughts and opinions heard as well. After all – you never know where a great idea will be hiding in wait!

People also need to believe that they have a good future with the organisation. Or let’s face it – what reason do they have to stick around for the long haul?

One of the best employee engagement strategies to help get this message across is to provide opportunities for employees to develop their skills and knowledge.

Employee development opportunities are the second-biggest driver of employee retention, behind only a satisfactory salary.

And don’t fret that by doing this you’re providing a springboard for employees to take their enhanced careers elsewhere.

As long as you have everything else in place, you’ll be sure to find they take pride in investing their talents and abilities where they are – rather than making the leap.

Which leads us nicely onto…

Last but not least, is the employee’s overall experience within the organisation.

It’s all about empowering your employees to be able to excel themselves every day. 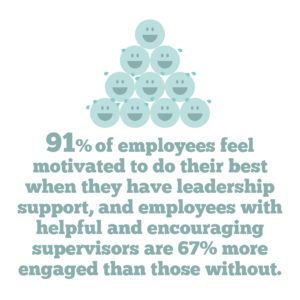 We’ve already discussed the importance of creating a line of sight between their daily efforts and the organisation’s vision, so they understand how their contribution impacts the wider organisation. But do your employees have the necessary resources, environment, and support to make it happen?

This last point is particularly important, since 91% of employees feel motivated to do their best when they have leadership support, and employees with helpful and encouraging supervisors are 67% more engaged than those without.

Having sight of this all-important safety net will boost your employee’s confidence to take risks and break the mould, leading to improved results.

Clear role and performance expectations are also vital. If we don’t thoroughly understand what’s expected of us, how could we possibly know how to use our talents for the best, or where we could improve to achieve better outcomes?

The good news is that, among employees whose managers help them set performance goals, more than two thirds are fully engaged.

Lastly, 90% of employees believe their work environment boosts their productivity – so having the right environment and equipment is essential too.

Technology is advancing rapidly, and in a world increasingly reliant upon white-collar workers, having up-to-date digital expertise and tools is imperative to staying ahead of the game.

Plus, it’s good for the sanity too!

Get actionable insights, advice and ideas from 50 leading internal comms experts in our popular report, designed to help you take leader and manager communication to the next level.

As long as you deliver on employee engagement strategies like giving meaning to people’s work, creating an empowering, inclusive culture, and offering frequent support and recognition – as well as treating employees as human beings rather than organisational assets – then you’ll create a working environment where people are proud to be their best.

And who knows – maybe one day, the next generation of leaders and employee engagement specialists will be inspired by your story too!

As Employee Engagement Consultancy of the Year and IOIC Best Agency, we know a thing or two about what great employee engagement looks like.

So if you’re itching to get your people buzzing with productive brilliance and engagement magic, get in touch to get the conversation going. We’d love to show you what we can do for you!

Got a brilliant idea you simply can’t keep to yourself?

We’re always looking for fresh faces to help us further the IC conversation by writing guest articles for our blog. If you want to make your voice heard on internal comms, employee engagement, change management or leadership development, we’d love it if you got in touch!

The power of storytelling in the world of personal development

Discover how PRINT® enables you to inspire authentic storytelling, build better understanding amongst your team and gain greater awareness of your colleagues.

Leading the way with PRINT® – East Riding of Yorkshire Council

We’re delighted to welcome ERYC’s Learning, Skills & Workforce Development Group Manager Sara Arnold to our blog for a virtual cuppa and chat about how PRINT® has impacted the organisation.

Getting to know our PRINT® coaches – welcome NHS

Discover how PRINT® has enhanced, supported and added value to people development practice at 2 NHS Trusts.

We’ve been shortlisted for the Inspiring Workplace Consultancy Award, and to say we’re thrilled is quite the understatement.